The Elements of Classical Architecture: The Corinthian Order 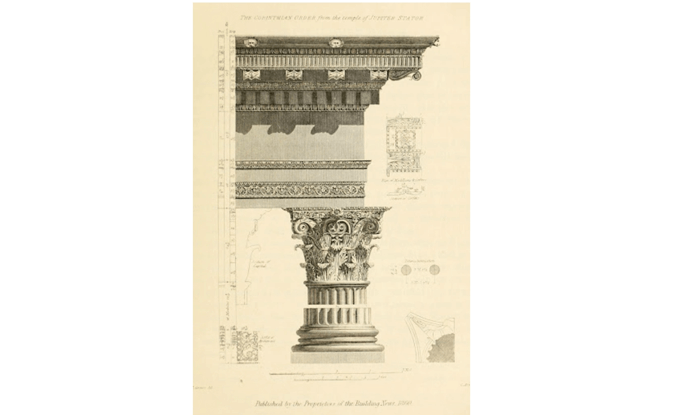 Acting as a base to the wider canon of classical architecture, the five classical orders have been used since antiquity as a means of proportioning buildings in a harmonious way, while simultaneously giving logic and meaning. The purpose of this course is to provide an in-depth study of the Corinthian Order, including its history and proportioning. The history will cover the evolution of this order from its roots in Ancient Hellenic cultures through its rediscovery in the modern-day movement of New Classicism. The study of Corinthian proportions will include a hand-drawn tutorial in which participants will compose the base, capital, and entablature of the order on paper according to the American academic William Ware, who founded the schools of architecture at Columbia and MIT. Ware in turn took his cues from the Renaissance architect Giacomo da Vignola.

Mason W. Roberts received his training in Classical Architecture and Historical Preservation at the University of Notre Dame, where he graduated Valedictorian with a Bachelor of Architecture (BArch) in 2013. Since then, he has worked as a designer and draftsman at the award-winning firm Robert A.M. Stern Architects. An Associate at RAMSA, Roberts specializes primarily in Classical Institutional buildings. His corpus of projects include work for such institutions as the University of Virginia, DePauw University, Colgate University, the University of Georgia, the New York Historical Society, and the Virginia General Assemblies. Academic works in historic preservation include an in-depth analysis of the temples of the Roman Forum using laser-scanning technology, and documentation of the Historic Core of Mumbai, India.

A member of the ICAA’s Education Committee, Roberts has previously taught STRIPPED: The Art of Stylizing Classicism in a Reductive Manner, Elements: The Ionic Order, Elements: The Corinthian Order, Elements: The Composite Order, and Traditional Arch Construction. Roberts is also active in mentorship programs for primary- and secondary-aged students including the ACE program of Greater New York, and the New Heights Program.

REFERENCED TEXT (Not required to read before course)

Note: copies of essential plates from books below and additional sources will be provided.
Ware, William. R. (1994 reprint). The American Vignola: A Guide to the Making of Classical Architecture. New York: Dover Publications, Inc.

What You Will Learn

At the end of the course, participants will be able to:

The Florida Chapter would like to thank their sponsors: