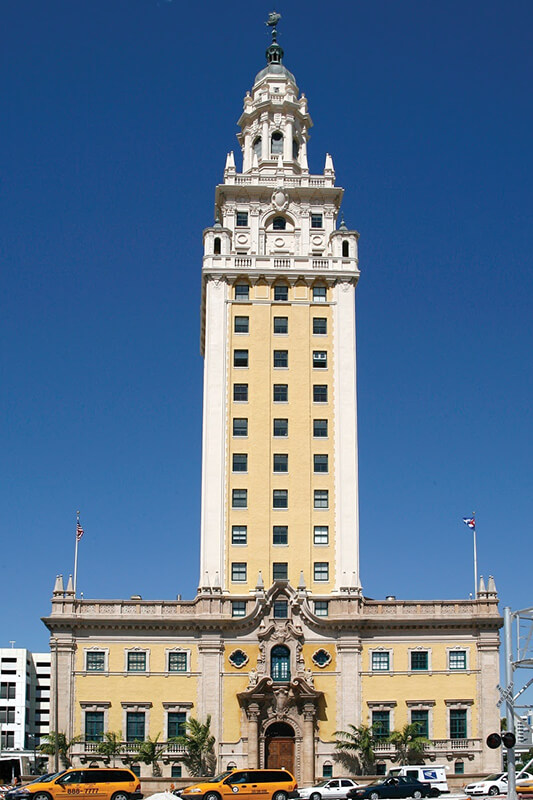 Join us for our Florida Summer Sketch Tour, a weekly virtual sketching exercise.

Constructed in 1925 as the home for The Miami News, this National Historic Landmark was designed by George A. Fuller, Schultze & Weaver, architects known for their Mediterranean Revival style and notable hotels: the Biltmore in Coral Gables, the Breakers in Palm Beach, and the Waldorf Astoria in New York.

Striking in its architectural detail and richly ornamented façade, the Freedom Tower reaches 17 stories and contains over 82,000 square feet of space. The tower was modeled after the Giralda Cathedral Bell Tower in Seville, Spain. The use of Spanish and Italian architectural details with Moorish ornamental embellishments can be seen throughout the building. Some highlights to note are the oak main doors, a cast iron decorative transom, wrought iron balconies, Corinthian capitals, groined ceilings, cast concrete cherubs, and the spectacular octagonal cupola topped by a weather vane featuring a Spanish galleon that extends the tower’s height to 255 feet.

The building sat vacant from 1957 to 1962 when the U. S. government leased it and transformed the building into the Freedom Tower, opening the Cuban Assistance Center under the Migration and Refugee Assistance Act of 1962 during the Cold War period to assist the large number of Cubans fleeing to the U.S. for political asylum. The Freedom Tower, also known as the “Ellis Island of the South” provided health, housing, and educational assistance to ensure the Cuban exiles could successfully resettle and start new lives in the U.S. from 1962-1974. The Freedom Tower was later donated to the Miami Dade College in 2005.