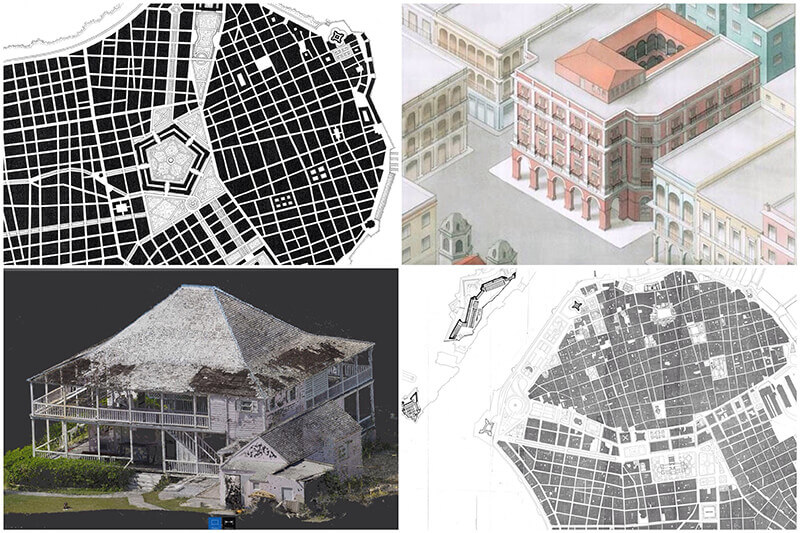 Jorge Trelles was born in Havana, Cuba in 1958 and grew up in Miami, Florida. He holds a Bachelor of Architecture from the University of Miami and a Master of Architecture in Urban Design from Cornell University. He is a principal of Trelles Cabarrocas Architects, established in Miami in 1986. The work of Trelles Cabarrocas Architects has been published in a monograph by ACAM Ediciones, Casas Internacionales and others. The firm has also be honoured with awards from the American Institute of Architects and the Institute of Classical Architecture and Art. Jorge Trelles is a lecturer at the University of Miami and a visiting professor at University of Notre Dame, where he has been focused teaching on Cuba. Jorge Trelles is currently working on “Cien años de arquitectura,” an exhibit on the work of the three generations of Cabarrocas architects for the Oficina del historiador and the Centro hispano-americano de cultura in Havana.

Rafael Fornés is a Cuban architect currently residing in Miami. He received a degree from the Instituto Superior Politécnico José Antonio Echevarría in Havana, as well as from Budapest Technical University. Fornés has worked at the Architecture and Town Planning Metropolitan Offices of both Havana and Budapest, the Fondo Cubano de Bienes Culturales, as well as at Duany Plater-Zyberk & Co. in Miami. He has taught at the Instituto Superior de Arte in Havana and currently teaches at the University of Miami and University of Notre Dame. Fornés is also involved with the Cuban National Heritage organization and the Institute of Classical Architecture & Art.

Ricardo Lopez has been teaching at the University of Miami School of Architecture since 2004 in the areas of graphics, design, and historic preservation for both undergraduate and graduate students. He has also participated in traveling courses such as the Open City Studio in Tokyo and the Grand Tour of Europe with an emphasis on ancient Greek architecture. His courses on Documenting Historic Architecture have yielded national Peterson Prize awards for both the Gesu Church and the Shoreland Arcade. Upcoming submissions to the Library of Congress include the Coral Gables City Hall, Miami Beach Community Church, and the Residency at Harbour Island, which was conducted in conjunction with the Antiquities, Monuments, and Museum Corporation of the Bahamas. In 2015 Mr. Lopez was appointed Assistant Director to the Center for Urban and Community Design where he has engaged local communities in the surveying and documentation of historic places, including Coconut Grove, Overtown, Little Havana, and Coral Gables. University of Miami B.Arch 2000, M.Arch 2007.

Chris Mader is the Director of Software Engineering at the University of Miami Center for Computational Science. He and his team have been collaborating with the University of Miami School of Architecture to apply new and emerging techniques in photogrammetry and image processing to mapping and documenting informal settlements in Latin America, as well as to support documentation efforts of historical buildings.